For the past few weeks I’ve been hard at it most evenings finishing off some open-ended hobby work – a D&D adventure here, some miniature painting there, and all for my next wee blog theme.

‘Doodle a Day’ is a project I’ve promised myself for a few years now, and one which I intend to employ to kickstart a period of concentrated illustration work that (fingers crossed) will be coming up. I am an itinerant illustrator, really. Untrained outside high school, but an inveterate doodler, so I thought I should try to combine the two and see what happens.  The result will hopefully be an illustration blog for the duration of this month, with no set theme or style – I’m trusting that one or both will develop as time passes.
Here’s how this will work – the rules, if you will:


Just to be sure I’d not be short of inspiration, some illustrations may be based on an earlier form of this project, ‘Doodle a Dream’, which ought to be self-explanatory. In 2010 I kept an irregular (in every sense) ‘dream diary’ – basically a bedside notebook on which to scrawl – sometimes literally, what I could recall from any dreams I’d woken from. Being then a parent of a young child with eccentric sleeping patterns helped the process, but I fear some themes crept in, and so I’ll space these out with more mundane subjects if I think things are getting a little bit ‘trippy’. Maybe I’ll explain which ones are the dream-based doodles, or maybe I won’t! 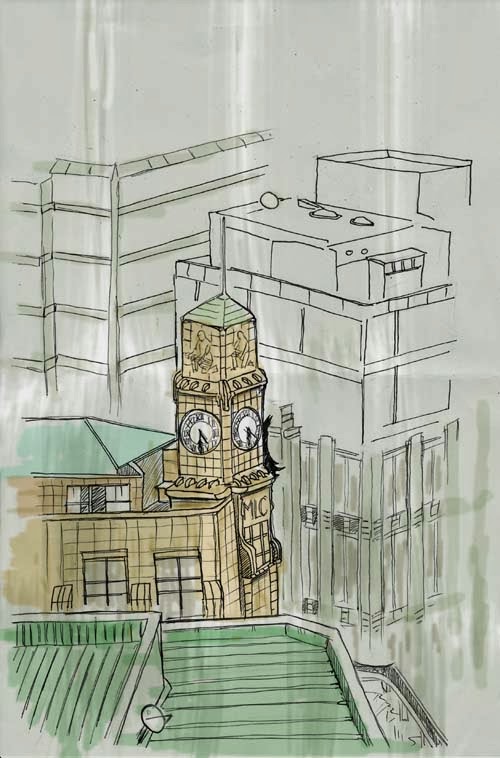 This is one of my favourite buildings in the Wellington CBD. I like it because it has some key points of interest: it’s a clock tower, it has a frieze on top of it and a cool spike that might be useful for tethering passing zeppelins to, and being an Art Deco-era sandstone building surrounded by a mix of modern and older buildings, it’s pretty unique in the Wellington skyline. Not that it makes much of an impression, as it’s steadily being dwarfed by the office buildings around it – hence me being able to look down on it almost from my work! The best bit about this building? The clock doesn’t work because the building’s upper floors house a hotel, and the very clock tower structure is an apartment, with the clock faces as its windows. Now that’s cool!
Posted by Jet Simian at 9:06 PM