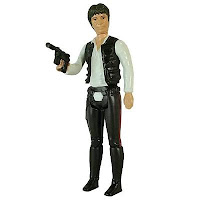 When I was a child I spoke like a child,
I thought as a child,
and I viewed movies as a child.

When I was a student I put away childish things and I viewed movies as a student.

Now I am a man, I realise I can have both things at the same time.

Thankyou, Morgue and the internets!
Posted by Jet Simian at 9:40 PM No comments:

Email ThisBlogThis!Share to TwitterShare to FacebookShare to Pinterest
Labels: Mash-ups, Star Wars, Withnail and I

"It's impossible… nnn…never make it out alive"

Adolescence is hell. The flipside of being at our most potent and energetic stage of life is for much of those years a lack of real control; of emotional impulses, our hormones and the development of our changing bodies, and outwardly our social and family groups, and imagined destiny. Charles Burns' Black Hole takes a walk through these dark woods of impending adulthood - the wilderness at night is a recurring location for the stories within, and in its gradual opening reveals a world of repulsion, guilt and questionable decisions. The re-telling of a journey to adulthood as body horror.

This collection was recommended to me by Tim who in turn had had it passed on to him by an enthusiastic friend. Black Hole is the culmination of a decade's work by Burns, and in design it shows. It's a heavy work thematically, but physically its weight may be added to by the sheer expanse of black ink used in the strip's monochrome palette. The artwork is often symmetrical, with panels mirroring one another across page spreads, and the white detail on the literal black hole of the graphics providing startling retinal after-images. It adds to the general trippiniess of the subject matter, and is a perfect visual impression of one of the story's big themes - the claustrophobia and loneliness of the developing teen. Forming the story are the experiences of four teens - stoner Keith, the A-student object of his affections Chris, her boyfriend Rob and would-be artist Eliza as they variously fall prey to the Bug, a physical and sexually-transmitted mutation that offers no special insight or super powers, just the certainty of being ostracised.

I was surprised to read that among the excised material in the anthology edition I'd read is a yearbook quote from an unnamed afflictee set (probably) some time after the story, suggesting that the Bug's outward manifestation is temporary, underlining its association with adolesence and pre-adulthood, but at the same time offering a potentially happier ending for (most of) the protagonists. That this is removed in the later version means that this hope for a happy conclusion is taken away, and the angst of the present, however temporary, remains. I'm in two minds about this; the story is frustratingly open-ended in places - as much as its focus shifts within the narrative anyway, so a likely resolution is welcome. On the other hand this sort of resolution is clearly not what Black Hole is about, any more than reaching the age of true adulthood, however arbitrary, is. If adulthood is personal responsibility and responsibility towards others then the three survivors are severally already there.
As a reader anchored in the Seventies and Eighties I really enjoyed the visual aesthetic of Black Hole, and the painstaking attention Burns gives his page compositions. The artist's work has for along time evoked to me the work of older titles - the EC horror comic covers, hippie-era psychedelia, and retro-rock art (no wonder informed by Burns' artwork for Iggy Pop's Brick By Brick, an album I didn't own but had a lot of time for back at Uni). The story weighs more towards the emotions of its various beats and character moments - not all of the mysteries are really solved, and fittingly there's a large figurative question point at the end of the book. It's an unsettling read - Freudian, Jungian, Proppian; in short, its own dark space I was content to visit briefly, and leave behind afterward.

Postscript: A movie adaptation is currently in development hell, but a very good short distillation can be found here. For obvious reasons, really NSFW.
Posted by Jet Simian at 5:24 PM 2 comments:

Video Affects: Everything Must Go, Come Back Around

When a band – a genuine ensemble rather than a backing group for a front-person, loses a member untimely, the result is often a drawn-out affair. Bands that work well are built on friendship and solidarity, so it’s an unavoidable fact that the death of one of the team has a lasting emotional not to mention creative effect on the band as a whole; sometimes that member is a lyricist or composer, integral to the band’s voice – other times they may play just as significant a role in the instrumental side. The loss, though open to being over-manipulated, is a matter usually expressed publically, if not openly -there are fans and listeners outside the group who might also feel the same emotional blow. If the death of that member doesn’t spell the demise of the band – as that of Kurt Cobain’s did for Nirvana, then the question of whether the group continues – and in what form, arises. Many do – some even continue to find success well after the wake has disappeared.

Two examples here, then. The 1995 disappearance of Richey James Edwards, co-lyricist and rhythm guitarist for Manic Street Preachers is one still (relatively) recent and notable example. Edwards’ story can be seen here, though it’s far from being an unfamiliar one to anybody who followed British indie and pop music in the 90s.

What's your story baby/No control of what I am saying
Winter leaves still make me believe/No vendettas, just a cherry blossom tree
(‘Nobody Loved You’, from MSP’s This is My Truth, Tell me Yours)

Edwards and bassist, co-lyricist Nicky Wire shared a flat in the band’s early days, outside of which a cherry tree grew. That this tree became something of a symbol for Edwards can be seen in the video for Everything Must Go, the second single off the album of the same name, the next release after James’ disappearance. Blown and denuded by wind as the remaining band stage a rending, Spector-like anthem of loss and overcoming, it stands in the video, petals cascading across the faces of the band, and remains the final shot of the clip. With no confirmed sighting of him since that time James was declared deceased ten years later, the popular conclusion being suicide.

The thought of never knowing/can kill me just the same
A solitary blossom/reminders of a friend
(‘Bitter Glass’, from Feeder’s Pushing the Senses)

To another solitary blossom in John Lee, late drummer for Feeder. Lee’s suicide was no less shocking to his fans, and perhaps came as more of a surprise. With an album in the wings, Feeder continued, dedicating their first single Come Back Around to their fallen friend. Though his place was most certainly filled for the recoding, the band went one step further in the video – replacing Lee not with one drummer, but four. All women, all pretty much identical. The reveal is gradual – nothing for the first verse, then gradually as the camera pulls back, the ‘fourth wall’ is revealed to show surviving members Grant Nicholas and Taka Hirose performing not for the camera, but for Lee’s stand-ins, the filming deliberately slowed to ensure all four drummers worked precisely and mechanically. It’s an arresting video, even if somewhat tongue-in-cheek, the indulgence of the drummers being young, beautiful women being apparently a nod to Lee’s spirit in life, and complaint of no women in their past videos.

I like both videos, particularly as each song provided a proper introduction to their bands for me, though Feeder’s video was discovered long after I was aware of the song. Previously the band had been a well-meaning, fun sounding guitar group, responsible for the cheery Buck Rogers. The post-Lee Comfort in Sound certainly indicated a shift in the band’s sound, continuing to last album Pushing the Senses, where the drummer’s death remains a background concern. In the case of Manic Street Preachers I’d followed them vaguely through early music-press baiting exploits – equal implausible boasts and portentous stunts (Edwards’ 4Real incident included), but it was Everything Must Go that drew me in properly. My induction into the band is based on them as being without Edwards (who was never replaced). I can’t say I’m genuinely a Feeder fan, but I’m definitely a Manics one. Both videos come across as sensitive and not sensational, reverent but not cloying; they’re affirmations of the strength a good band can draw on and build on in the face of tragedy. That both bands had a life beyond the death of a member is a testament to that strength, and a rare thing in modern music.
Posted by Jet Simian at 6:47 AM No comments:

Talkin' Eds Slight Return: The Number One of the Beast 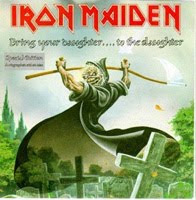 Back in the middle era of 2010's Talkin' Eds series I dedicated a Very Special post to Iron Maiden's only UK number one to date, 1991's Bring Your Daughter... to the Slaughter. You, dear reader, will be cheered to know that there's little more I can add to that post, however Freaky Trigger's 'Popular' series of UK number one singles has just recently reached Maiden's chart summit - and you can read it here.

I do recommend the visit. It's short, sweet, well-argued as always, and the comments field is always worth a browse for FT's usual gang of highly-informed and pop-passionate contributors and readers. Viewing Maiden's chart triumph through the lens of popular music rather than the heavy metal scope would perhaps inevitably garner a measured score out of ten on their own ratings system. In this case I don't think the score unfair - in fact, the number is... not unfitting at all...
Posted by Jet Simian at 8:34 PM No comments: