Happy St Andrew's Day everybody! There - did it properly, this time. 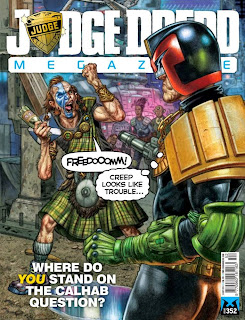 To mark the Scottish Independence Referendum earlier this year, the Judge Dredd Megazine devoted its front page (illustrated by Glenn Fabry) and supplemental ‘floppy’ reprint magazine to all things judicial and Scottish – to whit: some of Jim Alexander's Calhab Justice, upon what I have already rit here.

This is only the second reprint of a CalHab strip, the first being the one-off Annual story ‘Hogmanay’ for another Meg floppy devoted to yuletide Dreddverse stories. It’s a lovely wee slice of life in GlasCal, and properly should fit in as the second story in this new collection, but doesn’t. A shame, as it would have been nice to have it with its mates for the first time.

The floppy itself is, therefore, incomplete, and takes in roughly the first third of the CalHab stories, introducing its Big Yin central character Judge Ed MacBrayne, and his sometime fellow judges Buchan, Schiehallion, and the ill-fated Murdo, not to mention their boss, the un-named C.I. Ridgeways’ art does the early chores, setting the look and feel of CalHab’s capital, and the quirky faces of its mob-like Whisky Clans. If I could make one early observation about CalHab Justice, it’s that it was eccentrically-served by artists, but the safety-first approach Ridgeway offers his illustrating in all his work actually helps CalHab by not scaring the horses too soon. The artists seems to have fun with the plukes and podge of Clan big-wig Abercromby, and his version of the C.I is the most recognisably human and world-weary. He’d have been fine, if not necessarily that exciting, kept in the artist’s saddle. But we move on… 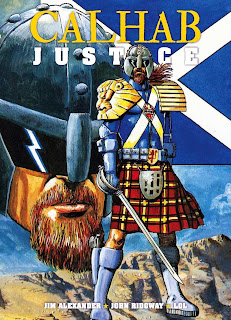 After 'Hogmanay''s omission we're into the Lol stories, illustrated by the artist of that moniker, whose career with the seems to have been contained within the Meg and a one-off 2000AD gig. Lol's work seems heavily influenced by that of Simon Bisley - as were many artists at the time, although the black and white work he renders here references Bisley's turn on ABC Warriors, also monochrome. It is, as at least one reader said recently, 'of its time', and might have been better in colour, becuse in its dark-saturated monochrome the storytelling suffers. And that matters, because once Lol arrives on the scene, Alexander's B-plot takes up the A spot, with its trio of judges emroiled (or in the case of MacBrayne, virtually sidelined) by a story of psychics, civil war and a bloody greta big explosion at the end, courtesy of the srip's fourth artist, Kevin Cullen.

I'm still none the wiser, what with my patchy collection of Megs, but this floppy pesudo-trade has done a good job in putting the more consistent, MacBrayne-heavy strips together, even if it's not complete. I think that gathered they present a more coherent collection, and would welcome a second volume (although it could really go to three volumes.) The strip's relegation to reprint-limbo as a 'floppy' freebie and not a full trade paperback would suggest that my hopes have been dashed, and the Meg's floppies do contain more than one half-told series , so a first installemtn s no guarantee of a follow-up. I sense a crusade pproaching, to collect the disparate pieces and do the job myself. In th emena-time, this is a good start, and a reasonable template.

And finally, because the comments on a cosplay board likened the CalHab uniform to a real-life 'bampot' whose video below I saw too many years ago on either Radio With Pictures or Max Headroom, but could not thereafter be unseen (though I could never remember any other detail of it including the artist or the song), let's end with a cheery, mad slice of Eighties Caledonian pop-funk. You see? That's the problem with the kids these days - too much Jessie J and not enough Jesse Rae.

Posted by Jet Simian at 9:23 PM No comments:

Happy St Andrew's day, everyone!- whups, no, I'll do that tomorrow I think.

This is a quick post anyway, to get a few words in before the month expires and to allay the fears or at least one individual that I haven't fully slipped off the radar. I am in fact ankle-deep in plastic and tree bark, painting up my Mirkwood Elves, but more on that for another time, as they say. Let's do a belated Friday Night Local instead - and hopefully my worried reader won't think the song choice is something of a set-up...

Now, when Mrs Simian and I were new to Wellington we used to entertain our visiting guests from outside town by taking them to the national museum, Te Papa where they could feast their peepers on the tat and taonga of this young little country, the highlight usually being 'Golden Days', a sort of mini tableau history of New Zealand as a country set in a mock antiques shop cinema replete with animated curios choreographed with the action onscreen. We stopped taking friends to this some time ago, because the exhibit was never updated, and 'ends' in the now wide-eyed halcyon days of the late 1990s and, well, it's a bit tired and twee to the converted now.


"And if the past's a distant land
Maybe there is no rhyme or reason
And if we salvage what we can
You and me."

Minuit's video for Aotearoa, off their third album, the wonderfully-titled Find Me Before I Die a Lonely Death dot Com, could have repeated the mistakes of Te Papa's hoary old nostalgiafest, opening as it does with some familiar images to a local. There's a bit that's familiar in the song itself, I could add - the keyboard line in particular strongly recalls Kate Bush's Running Up That Hill, but the rumbling bass and the trip-hop drums carry it through well enough. The cleverness instead unfolds slowly.

Past a first full minute of largely black and white chronological images recalling the birth of a country and the usual suspects - Kate Sheppard, Earnest Rutherford, ANZACs on parade, Ed Hillary, Aunt Daisy, to a gradual splash of colour in tragedy and public outcry - the Wahine, Vietnam protests, Bastion Point and the land hikoi, the 1981 Springbok Tour, the Rainbow Warrior, the Tino Rangatiratanga flag and then Dame Whina Cooper weeping followed by... a child dressed as Batman?


"And yes it's true we're very young
And we have sticks and stones and bruises
Can we undo what has been done
Is this the way destiny chooses?"

Past the 1:30 mark history is quickly superceded and the present dominates the rest of the song, matching singer Ruth Carr's rallying call "It's you and I-I-I-I-I." Here's Aotearoa New Zealand as a fresh landscape, and its people represented by young, physical, happy, optimistic faces in a land of adventure and aroha. Minuit's fans submitted photos of themselves to create a montage of (allegedly) nearly a thousand faces, emblematic of a multicultural, self-aware country - stranded by geography, but one in which I am daily thankful I live. The stark contrast between the known and the famous of the past, and the suddenly anonymous present and future is a striking gesture, and though I swear it's not parochialism it gets me every time I watch this video. And I could swear that at 2:55 I can see Dr Morgue, though it's probably a doppelganger. Still, you know what they say about degrees of separation down here...

Minuit performed their farewell gig and called it a day here in Wellington a mere few weeks ago, adding to the musical legacy of the little city of Nelson that already includes the likes of Sharon O'Neill and, er, Courtney Love. I've tried - a little - but I've not been a fan, but that's no criticism. Minuit were a nuggety little band who survived tours, illnesses and a fickle local industry to clock in a respectable number of albums, some overseas airplay and an enviable and frankly good-looking fanbase. So good on ya, Minuit, and all the best for future endeavours.
Posted by Jet Simian at 9:09 PM 2 comments:

Back in the Room!

Well, okay, the other side of my illustration project. I've now completed pretty much all (pending alterations and/r corrections and the final cover) of Mary's Christmas Gorilla, and almost on time. It's near time to return to the blog and some less-arduous pursuits.


Old promises and projects are slowly seeping back into a recently Gorilla/ Dr Who podcasting/ day-job-occupied brain, and all going well, I can return to some earlier projects (the Dreddorld judges, my Hobbit-themed figures including the half-done Mirky Dozen) and some new ones!

In short, I'm back in the room, and for the foreseeable will be blogging updates and back-filling my emptier months with posts that just wouldn't work so well right now. it'll make sense, believe me, but in the mean-time apologies in advance for whomever might be following me through RSS.

I'll also be doing some spring cleaning in the blog itself, updating some links, weeding out some inactive ones (sniff!) and adding some more recent interests. If you've stuck around for this long period of radio silence, cheers! And stay tuned.
Posted by Jet Simian at 9:17 PM No comments:

Intoning Verisimilitude to the Autocratic Hierarchy

No, I don't know what the point of Russell Brand is, a clever and charismatic man with a (largely) strong message and a (personally) irritating public image; but I do know a couple of things: firstly, that in order to truly make its mark speaking truth to power demands the register of the everyday citizen, and secondly, this is still very funny.

Posted by Jet Simian at 8:26 PM No comments: