A couple of weeks ago, roughly mid-way between Moses' last day and about now-ish we had a visitor in our back garden. It was, as is becoming depressingly evident, a pretty typical bloody winter's weekend in the Capital with occasional breaks in interminable rain for truculent blasts of wind. A perfect day to be indoors working on the household budget, then.

Was it on one of those blasts of wind that Penny came into our lives so briefly? Maybe it was. We don't own any chickens, so the appearance of a rather healthy-looking one scratching enthusiastically away at our bale of pea straw (waiting for a fine day to go on the garden…) was a bit of a surprise. We watched her for a while, making her way around the garden, dodging the plentiful weeds and seeking out the likely plentiful worms and woodlice among them - both of us were probably hoping the same thing, that she'd move on and we wouldn't have to worry further. But she didn't - we'd made too good a foraging site, I think.

In the absence of any neighbours we were aware of with chickens we decided we needed to collect her before a car, cat, dog or one of the recently-acquired and party-hard neighbours down the cul de sac did. I went outside and gave a half-hearted "chook chook chook" and was surprised when it was pointed out to me that the hen I was looking for in the front yard was already at my feet quietly clucking. I scooped her up with no resistance and in the garage she went; we got on the phone to the SPCA, hoping that a Sunday mid-afternoon wouldn't be too late for them to pick her up.

It was, or rather, it became so after we had a return call around 4:30 to say they had a dog-versus-car to attend to, so could we look after the hen overnight? We guessed so, so I went out to the garage to find the newly-named Penny and tidy the clutter up to make things a little more homely. When I found her she was in a cupboard under the workbench. I wandered around clearing things up while she followed, pecking away at the spaces I uncovered in moving things. Moses' old cat cage was vacant, so I tipped it on one side and lined it with newspaper and a towel over the top for a hutch, left enough bread and water for her to make the Sensible Sentencing Trust proud of me and left her to it.

That night was miserably cold - two degrees with sleet and wind, so I checked in on Penny a couple of times before bed and once in the wee small hours. The first peer through the garage window saw her still moving around and regarding me and my torch through the glass. Later she was in the same place she kept through the night - she'd spurned the coop and was tucked up against an old wardrobe on the concrete floor with her head buried under a wing. 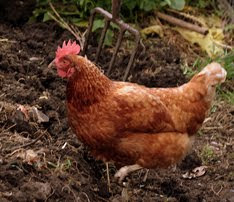 The SPCA collected her by the Monday afternoon and a later inspection and (necessary) tidy-up of the garage floor around her adopted spot revealed a wee parting present - a small brown egg which I should probably finish this story with by saying we ate and found delicious. Penny it turns out is a Red Shaver and therefore a good and constant layer with a quiet temperament, a great addition to any flock. She was also apparently an ex-battery hen which surprised us because her condition was so good, but one of her wings hadn't been clipped, which may have been the catalyst for her escape and arrival in our yard. Talk about your lifestyle changes!

And that's the story! The happy bit at least. Read on if you want to hear some grumbling...

Email ThisBlogThis!Share to TwitterShare to FacebookShare to Pinterest
Labels: Domestic

Moses came into our lives as a small, mewling ball of fluff in 1994, bought at Petcetera, a now long-gone Dunedin pet shop where he hadn't been my girlfriend's first choice (a smoky grey sibling, possibly a girl), but his on-cue dirtbox demonstration sold him to her, proof that we probably wouldn't need to be bothering too much cleaning up after him. He was a pretty good kitten, although as testament to his eventual size when I came home from work nothing seemed to fit on him - he was all paws and ears. 'Spock' seemed a pretty apt name, but I wasn't having that; similarly, 'Boaz' was vetoed because my girlfriend wasn't going to be yelling that from the back doorstep in the mornings. But we needed a good name for him to grow and grow old into, so Moses it was. His first night with us was a noisy one - he was a constant vocaliser, and when his pitiful mews from our laundry became too much I brought him in to bed with me, sleeping at an odd angle lest I crush this purring bundle next to me, and our training - and my eccentric sleeping posture, took off from there. An early vet exam brought up an issue of congenital knee joint problems which would likely need to be fixed at some stage "How much?" we asked, "About two hundred per knee" the vet said. We decided we'd wait until the problem surfaced and it never really did.

Moses stayed with us, seeing off an intended flatmate, 'Oscar', who went to the flat upstairs instead after which they became firm buddies. He survived a fall off a balcony and made a rapid recovery after breaking into a packet of cat treats while under house arrest, and also survived pursuit by a couple of dogs belonging to some particularly ugly squatters down the road. We moved from Canongate to Opoho and he spent his first 'captive' afternoon in the new flat halfway up the chimney. Somewhere I have my favourite picture of him on a macrocarpa stump behind that flat, snow-white against a blue sky with the wind ruffling his fur and his normally large-pupiled eyes looking suitably spooked.

When we moved to Wellington he flew up with us in the plane's luggage hold, looking even more spooked when unloaded on a noisy tarmac. It was an even smaller Hataitai flat that we had our first big emergency, losing him when he got locked in someone's basement laundry for a week. That was a long week. We'd had him for five years by then and he'd become a permanent fixture, his vet visits and bookings into increasingly harder to find catteries for holidays an essential part of the calendar. Two more homes followed and he spent a month in one cattery while we did our bijou-OE (he came back with a different meow, somehow crosser and more irritated), and a couple of nights in the emergency vet's when a run-in with Monty, a psychotic Burmese resulted in an expensive operation and a rubber hose draining his chest for a few days.

For so many years he'd been such a part of our lives that when his health eventually started to become an issue we began to talk about what we would do for him when it needed to be done. He was on various arthritis pills for about three years (possibly his knees eventually catching up with him), and heart pills which likely started to affect his kidneys for two of those. When he gained a human sibling he took it with great grace, keeping his distance bar the odd curious nuzzle, and tolerating his tail being pulled by very enthusiastic and strong little hands. But in the past year that tail didn't stand up as much as it had used to, 'questioning' everything as he patrolled our back yard. He spent more time indoors, and more time sleeping, and though his kidneys had been in very good health for a while, his weight went down and never returned to the six-plus kilograms of his luxuriant prime. When knots started to develop on his belly fur and around his back legs we knew he wasn't able to groom himself as immaculately as he'd done in the past, and a blood test at the vets confirmed he was well into kidney disease. We knew he was fading, but we hadn't realised how little time we had left.

In the end we pre-empted things, and had him put down before he was too unwell and it needed to be done anyway. In the last three weeks of his life he got into a fight and caught a bird, but unusual episodes even in his prime. Having both had other cats who'd deteriorated and become skittish ghosts before our eyes, we were determined not to let Moses go the same way, so we sadly made an appointment and kept it. I wish I could say it was a peaceful end on the day, but it mostly was, and was still preferable to him ending his life in great pain, off his food and no longer himself. And he wasn't alone, slipping away in my arms, his body impossibly limp and sagged under sedation before the last injection that had him just stop, then sigh, and then cease.

Some pets get under your skin in ways that just break your heart in the end. Moses was described by friends as a 'gentleman' and a real character, words that probably get used for a lot of good cats and dogs around the place; but he genuinely was a great companion, noiselessly joining us on our back deck in our quiet moments or appearing as an unexpected lump, rumbling in the dark at the bottom right hand of the bed (always my side, since that first night). We've patched up and reclaimed 'his' distressed couch, and rediscovered to our surprise that it's the most comfortable place in the whole house. Moses meanwhile is in our cold back room, cremated and sealed in a box which seems far too small for all the affection he gave us and we gave him over sixteen years. When the weather clears he'll go under his lemon tree in the back yard along with a few items of his.

Rest in peace Moses. You were the best cat ever.