By 1990 Iron Maiden were playing to a home crowd and were well and truly a diminished pop influence, despite good chart ratings for Seventh Son. Lacking the youth and menace of their early years they were something of a joke institutionally. And crucially this is what they were emblematic of to a new generation - my generation - of artists, as witnessed below, circa 1991 and Blur's emergence as a big hitter in the early 1990s UK pop scene:

From Bit of a Blur by Alex James:

'Andy Ross through it would be a good idea for Damon and me to go and be nice to everyone at the EMI annual sales conference… There were hundreds of people there, including some proper pop stars. The boss of the company, Rupert Perry, made a speech on a little stage and said he wanted to introduce some special guests. Iron Maiden drove on to the stage in a bubble car and started swearing at everybody. Damon had a funny turn and ran outside.
…I was really drunk by that point and I went down to the bar to have a fight. Bruce Dickinson was at the bar. I hate Iron Maiden. They're devil-worshipping ponces. I said 'The devil can suck my cock and you can kiss his arse, you fucking poodle.' He got me in a headlock and sucked the end of my nose really hard. I was laughing quite a lot, not really resisting. We left it at that.

…I got home back to the squat and Justine said, 'Has anyone seen you this morning?' I said, 'Only Adam Ant.' She said, 'Aren't you clever! Did he mention your nose, darling?' I looked in the mirror and it was bright red at the end. It took days to go back to being the right colour.'

After ten years of blood, sweat and tears Iron Maiden hit paydirt with what is still a pretty routine song from a lesser album. Despite this pedigree, Bring Your Daughter… shares the rare honour of being both a number one single and a winner of the Golden Raspberry Award for worst original song from a movie - in this case A Nightmare on Elm Street Part 5: The Dream Child. The company it keeps is mixed to say the least; George Michael's I Want Your Sex from 1987 and Beverly Hills Cop 2 was only really huge in the Netherlands, while the USA's Billboard Top 100 and European Top 100 embraced Will Smith's parping ante-millennial Wild Wild West from the cinematic wet fart of the same name. The difference to note in Daughter of course is in versions, and version is as much context as a song being attached to a movie franchise. The solo original is slower, less dense in terms of instrumentation and production, and carries less of the rasping vocal of the later Maiden cover. Dickinson wails unsteadily in places and in general there's less of the thud and heft that Harris and McBrain would later add to the album version - the version that won the real gold. I definitely prefer the latter, but here's both for the sake of comparison...

Daughter's other triumph is also in context - while missing out on the Christmas novelty slot by one week (no thanks, as the CD liner notes claim, to the likes of Radio One), it did oust Sir Cliff Richard's Saviour's Day (his 13th UK number one - unlucky!) from the spot. And that counts for something indeed. Speaking for myself I recall seeing the video and thinking it cheesy, wondering why the over-reliance on old horror movie footage was there (another retro style from Maiden - little did I know then that this has been a tradition going back to Number of the Beast). It was catchy though - but I was over Maiden and had been for years. Why did they bother with such samey and kitschy material?

Thankfully my opinion wasn't king on the day. As has been seen increasingly over the years to the point of lampoon in Richard Curtis' Love, Actually and exercised as recently as last year in X-Factor v Rage Against the Machine the concept of the Christmas Number One is kind of a big deal in the UK. Presence there is as good as media coverage can get - even in 1991, and particularly if Maiden's sneering contempt of the influential likes of Radio One could be taken to have been genuinely mutual. A lightweight single, sure, perhaps teetering dangerously toward self-parody. Shame it couldn't have been a stronger single, but for its secular-cum-occult cheerleading over God bothering earnestness, and because it's for Christmas, it's a thumbs up.

It even got them back in the NME. Who'd have thought it? 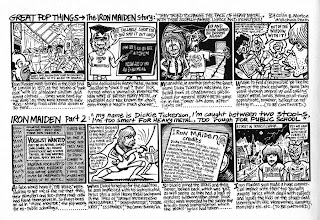 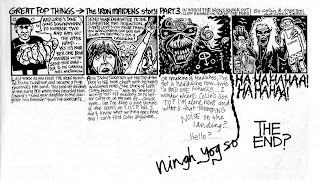