Talkin' Eds - No Fear of the Dying mash-up

In concluding this month's overview of the last albums of Iron Maiden's great initial push, it occurred to me that with the relative weaknesses of No Prayer for the Dying and Fear of the Dark there's a pretty decent album's worth of material between them. This mash-up album, call it 'No Fear of the Dying', could effortlessly bridge the gap between Maiden of old (raucous, impish, aggressive in places and punchy with song length) with the Maiden that was developing - longer, more studious, introspective yet looking out at a real world rather than a fantasy one.

Then I thought, why weigh one side of an album with the early attempts at the latter, of which only Afraid to Shoot Strangers survives as anything close to a stand-out? So back to the fun stuff it was.

Lads and gentlemen - introducing No Fear - Iron Maiden of old's last gasp before the age of Blaze and the return of Bruce: 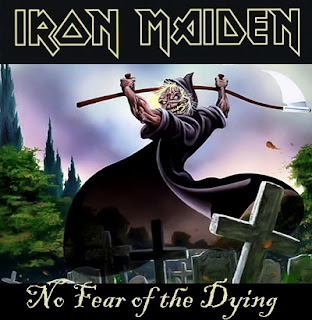 No Fear of the Dying

Right, now to make up an iTunes playlist and see if this thing will fly!
Posted by Jet Simian at 10:15 AM