Another quick biro doodle. If I'm honest, this took a little more than fifteen minutes, but really not much more in the biro stakes at least. 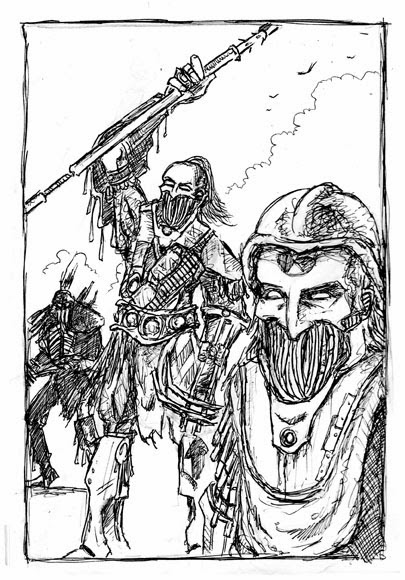 In this day and age with Doctor Who still enjoying large audiences, even (ironically) in the US, it's become quite fashionable to diss the 'failure' that was a long-shot 'back door pilot' of the 1996 Paul McGann TV Movie. You can read more about the effect and influence of the realised TV Movie on Zeus Blog, but how to explain the image above? Well, it's another idea for what might have been seen in a TV series had early plans for a US-led Who come to fruition in the early Nineties. The 'Cybs', cyborg scavenging space pirates, are often blighted with the scorn of Who fans who see them as a poor and unimaginative Cyberman pastiche. I think that's unfair, and even in the brief sketches and descriptions that can be gleaned from this abortive series bible, you can see that creator John Leekley was attempting something different - a fusion of mad Max/Road Warrior post-bomb savagery with elements of cyberpunk and space opera. Unlike the Cybermen of the Seventies and Eighties the Cybs have names, entertain themselves with belly dancers, and exist to plunder - a far cry from Who's emotionally-removed anonymous drones,whose schtick in the early Nineties was itself being seriously plundered by Star Trek's Borg Collective. Had we seen the Cybs appear on the small or big screen, I think they'd have fared better than popular belief might have it, and maybe it's only the fact that their story ideas in the 'bible' are adaptations of classic Who's Cyberman stories that really offers comparison. They could have been hokey, cheesy even - but they could have also been scary and a lot of fun.

My biro went a little bit fluid here, and perhaps I shouldn't have erased the original pencil, because what appeared on the page before that looked like something resembling the work of fantasy artist John Blanche. Ah well.