It is perhaps not a truth universally acknowledged, but the meeting point between popular music and the comic strip form is at times a strong one: both in their current form arrived around the same time, both developed greatly as a tool of American youth culture, before being exported and adapted in most parts of the world. Both forms attract the young and creative - as a outlet for expression they occupy mass culture and multimedia, and in their own way are dominated by big names nd legions of fans; they are equally aspirational, they feed off each other and converse along mainstream media,  although arguably one does less heavy lifting in the stakes of amorous endeavour...

The aspirational aspect remains, however, and to see an example of this in recent history you need look no further than the story of Manic Street Preachers. The two main writers and creative nucleus Nicky Wire and Richey Edwards were both huge fans of 2000AD, each apparently vying to appear in the magazine's pages in some form. For the record, Richey won, his efforts being realised through some reader's art in the days when a three pound prize was realy something to brag about: 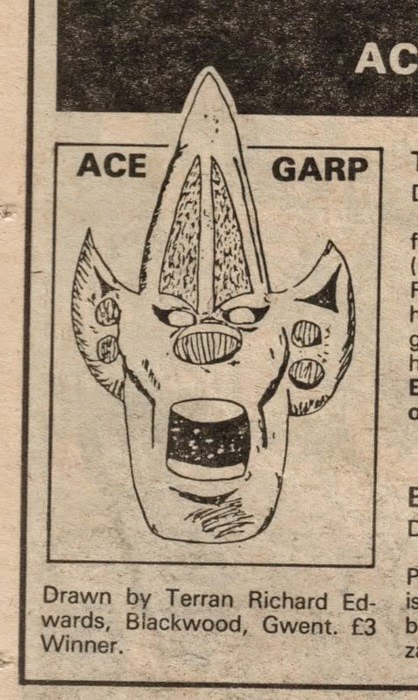 The rest is far from silence, however, as the slow rise of the band matched with the gradual entry of artists andw riters into the magazine's fold who were of the same age as the Manics bore witness. Now, pop music references were not a new phenomenon in the pages of 2000AD, and almost go back to the very first issues, but the entry of Blackwood's finest sons was almost prescient, with Grant Morrison nodding to the then rising name in his British superhero magnum opus Zenith: 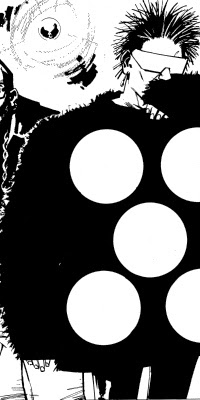 The fellow above is the superhuman Domino, whom arist Steve Yeowell based visually on Nicky Wire, and made his (almost) wordless debut in Zenith Phase III some time before Generation Terrorists introduced the band fully to a UK audience. So, match-point Wire, and, one assumes, something of a coup for the band as a whole getting their name in the magazine in the same wildly popular strip, not long afterwards... 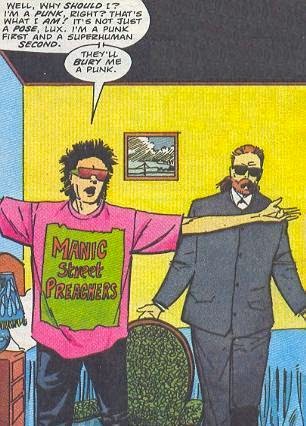 Portentous words, as Nicky's comic strip counterpart was, alas, not to survive the story the year, although the band's infamy had well and truly spread, with Richey achieving a sort of infamy in being parodied as 'Clarence' the (frankly more Brian Molko-like) frontman of Mega City One's Crazy Sked Moaners replaying his real-life 4REAL self-mutilation in Garth Ennis and Dermot Power's outrageous Dredd story Muzak Killer: 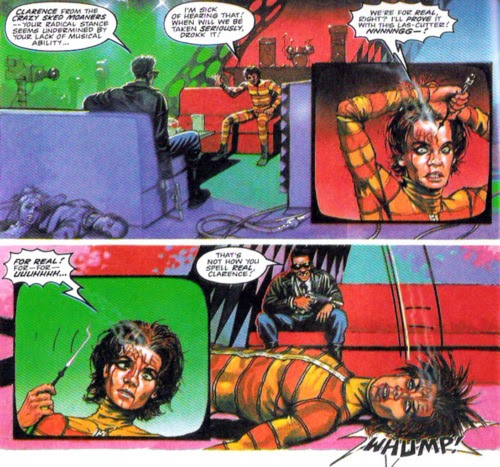 So much for the Manics in 2000AD, however. They never scaled those heights again, and indeed the Richey incident provedto be the defining moment for the band in comic stirp form s much as the music press of the day, as our final example proves, from Coln B morton and Chuck Death's giddy NME strip Great Pop Things. I recall I first read of Richey's razor blade antic in Melody Maker (RIP), but the point stands now, as it did then. This, in itself, was Making It...