The Empire Runs Back Again!

Holy cow - it's the ides of May again? You know what that means - Star Warps Day!

Usually I do something silly for Star Warps Day and really stick it to the OG Fifties trilogy, but I rarely go past the original Star Warps. It's the one that sticks most in my mind, like the after-image of an exploding Deadstar.

But you know, in this day and age of steaming Disney+ TV series and movies spun off from the universe and on everyone's lips, like the new prequel trilogy, and El Landolorian and Booger-Bobber Fett, it's easy to forget the second Star Warps movie, the downbeat and complicated The Empire Strikes! So here are some of my favourite images from that one.

Here's Luke and Layer (left) talking to robot C-thru-PO in the chilly caves of the ice planet Hot:

"I thought you smelled bad outside!"
This installment also introduced us to a galaxy of fantastic new locations and characters, like the dashing gambler and mayor of Clown City, Lango. Is he friend or foe? Watch your back, Hank Solo! 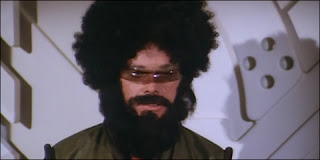 "You've got a lot of guts here!"
Speaking of that roguish Hank, my mind was blown when it was revealed that he was Layer's sister after all (spoilers!), and here he is with Opie "Ken" Benobi and one of the many many glamourous and powerful women of the original Star Warps trilogy, just before he got frozen and taken back to Jabber: 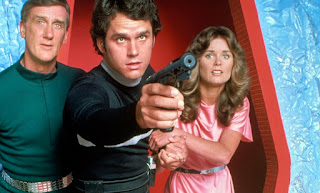 "I love you!" "You know it"
Happy Star Warps Day! The Warps will be with you. All ways.
Posted by Jet Simian at 6:00 AM No comments:

A Gnome for Christmas

A Northern Hemisphere winter is the popular version in fantasy RPGs and the 'traditional' setting for Christmas. It is a time of snow, darkness and shelter for remote human populations against the figurative and literal wolves of the leanest season. The harvest may be in, and an opportunity for feasting available to mark midwinter's passing, but in all it is a harsh season, and an isolated homestead might appreciate help - any help, from friendly beings. 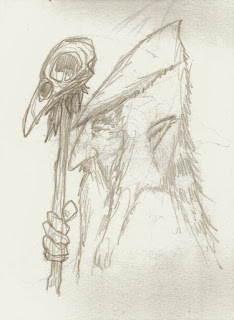 In Scandinavian folklore this is the Nisse or Tomte, a small humanoid creature who lives alongside countryfolk, helping (usually) invisibly as a quiet labourer, mender, and guardian of the homestead. They are, in that regard, akin to Brownies or Leprechauns, or perhaps the fairy tale elves from The Elves and the Cobbler; to be respected and occasionally appeased (but not flattered) lest that helping hand turn into a harmful one.

The equation is obviously closer to those aforementioned domestic helpers, but interestingly, by description the Tomte is very close to the Gnome: tall, pointed hat, long beard, very small, and seemingly able to either disappear or blend into the background at will. A useful natural talent to have - perhaps mechanically close to a Thief's Hide in Shadows skill. Might be useful to appropriate . The Tomte also gives the Gnome that essential niche of straddling the worlds of nature and civilisation: domestic without being domesticated, civilised without being a part of human civilisation.

In the Christmas lore of Scandinavia, the Tomte has been enhanced as a representative of midwinter or, in particular, Christmas. In its male appearance (and they are very usually male) it resembles Santa Claus, and is credited with gift giving, charity and the goodwill of strangers for the harshest season. As capricious as the Tomte or Nisse may be, this can embody much of the civil nature of the Gnome, giving the Gnome an additional 'hook' in his RPG identity - and a sense of time and location in a fantasy human world.

There's been a bit of an Idol Renaissance in the Simian household this year, spurred on by a little nostalgia. Jet Jr is about to start high school next year, bringing out all my feels as well as the music I was listening to at the time. That's for another post, but the works of the man born William Broad, plus his lead gunslinger Steve Stevens is on pretty high rotate. That's helped also by a pretty decent return to form this year with some studio TV appearances to boost sales of his new Roadside EP, the first single of which, 'Bitter Taste' I liked a lot.

Old (Rebel) Yeller Billy Idol has aged well, his voice acquiring a Johnny-Cash-like rumble, and he was always a lover of the classics of rock and roll, so it should be no surprise that he had a Christmas song in him. In fact, he's had several through the years, including the bittersweet family memoir 'Yelling at the Christmas Tree' from 2005 album Devil's Playground - but that has to have been beaten this year with an entire album, ladies and gentlemen, of Christmas standards. Read that list and weep, because the man is committed to the form, and he doesn't disappoint.

But it's not all covers. This is his (presumably original) 'On Christmas Day', an epic, sweeping statement of redemption and amends, of a family reunited on a specific day dedicated so often to the concept of family. Here's Billy Idol, family man On Christmas Day, born to run wildly back to his 'child' (interpretations open, which is clever) And it's another cracker!

We can forgive Mr Broad for missing the obvious 'Dancing With My Elf' this time, but he's on notice.
Merry Christmas, one and all, and rock on! Have a safe and happy family holiday, whatever and wherever your family may be.
Posted by Jet Simian at 7:00 AM No comments:

Gentle reader, I have a rather full dance card for the next week with Real Life(tm) and Other Projects(r) hanging around, so there may be Gnomes posted with not many comments accompanying. Oh, there's plenty more to write, but not the time to put it onscreen just yet. bear with, and I'll be back in a bit with more Gnowledge

Posted by Jet Simian at 9:07 PM No comments:

Dungeons and Dragons changed their Gnome several times over until we got the version we have today, leagues from where the creature began, as Paracelsus' embodiment of the element of  Earth.  It's notable that it wasn't just the adventure profession that changed or 'evolved' over its history - they also changed appearance and motivation. 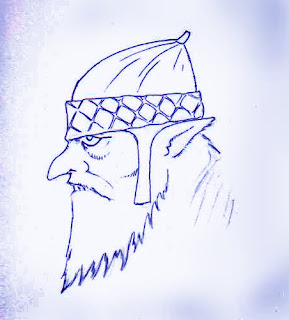 "Gnomes are excellent metalsmiths and miners. They love gold and gems and have been known to make bad decisions just to obtain them [...] Gnomes like most dwarves, but war with goblins and kobolds who steal their precious gold." Dungeons & Dragons Mentzer edition, Dungeon Master's Guide.

The traditional Gnome has stuck to the same template for over a hundred years. Everyone can describe a Gnome, probably without too much effort: short, hat, beard, nose, maybe a belly, maybe stone, maybe the woods, maybe the mines. The Dwarf association in Gnomes is strong and must be acknowledged, because their evolutions are shared. The rare appearance of the Gnome in its own right takes some time to assert the figure beyond a blending of the stock little person type (Paracelsus borrows from the 'pygmies' of the Iliad, which is transferred into English literature through Pope's The Rape of the Lock, which sets them up in a war with the more elfin Sylphs.) Thus Gnomes become earth-tied through the alchemical version by Paracelsus, then become embittered in Pope's parody.

Gnomes appear as a treasure hoarder and equally capricious in the collected tales of the Brothers Grimm (The Gnome) by which time their function as an antagonist is wrapped up with the equally greedy and subterranean Dwarf and Goblin. The Grimms of course also collected Snow White, whose absorption into popular culture through Disney and later (but unconnectedly) Tolkien not only redeemed the Dwarf, but made them accessible as humourous and sympathetic characters. The Gnome of course found some salvation as a garden totem - and perhaps it's the link with the green, growing world of nature which preserved the Gnome for more recent writers.

Folklore Thursday: 'On Gnomes: From Alchemical Theory to a Fairy Tale Staple [https://folklorethursday.com/folktales/on-gnomes-from-alchemical-theory-to-a-fairy-tale-staple/]

THE SEMIOSPHERES OF PREJUDICE IN THE FANTASTIC ARTS THE INHERITED RACISM OF IRREALIA AND THEIR TRANSLATION MIKA LOPONEN (2019, University of Helsinki. Dissertation, Department of Modern languages [https://tuhat.helsinki.fi/ws/portalfiles/portal/124871175/PhD_Dissertation_Mika_Loponen_e_text_version_1.65.pdf]

I find myself returning to the books of B.B and Wil Huygen for my Gnome treatises because they (largely) agree with each other, and both stick to a pretty reliable and recognisable depiction of the overland version - the one I prefer. 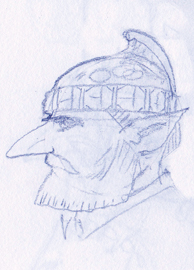 D&D of course had a booted foot in both camps, where early Gnomes could be the 'woodland' variety (see above) or a subterranean version, at the time hewing less to the very deep underground Svirfneblin (which translates to 'svirf' (unknown?) and 'neblin', connected etymologically to the Old Norse 'nifl', meaning mist or fog. No gnomes is Norse mythology - just elves, trolls and dwarfs). The subterranean Gnomes were miners, ever seeking precious gemstones and valuable metals. B.B's Forest of Boland gnomes are also miners - but for practical metals, using them for constructions like their railroad. The Gygaxian Gnome on the other hand is mostly a creature of the underground, seeking treasures and trophies of their craft. In a way, this makes them more natural dungeon crawlers than a protector of the woodland, and the 80s introduction  (by Gygax again) of the Deep Gnome simply drives them further underground - to the extent where Wizards of the Coast recently addressed what they perceived to be negative racial stereotypes tied to the dark-skinned Underdark peoples including the Drow, the Svirfneblin, and the more common Orc, among others.

There's no obvious evidence that the Gnome changed over thirty years beyond the early style because of a perceived racial association, but the aforementioned 'look' of the Gnome and the linking with underground treasures is where the D&D Gnome begins, and both definitively disappear in favour of the version you can see today. Could there be a connection?

Posted by Jet Simian at 9:53 PM No comments:

The early D&D Gnome stuck doggedly to form, thanks in part to the roster of artists who drew them, and in part with the insistence of of the then contemporary 'look' of the Gnome, most frequently seen in the Huygen books. That said, Huygen's book doesn't really go to town with big noses, and certainly not with LONG noses. Their ears are human-like and round, not pointed. Their beards are full and their hats are large, pointed and usually red - just like a garden gnome statute, of course. 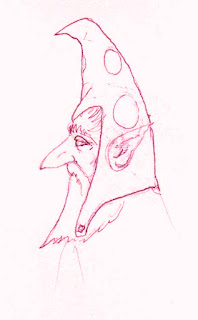 The garden gnome has no less a complicated history, going back at least as far as Anatolia (now modern Turkey) and travelling through Europe to Germany and of course the United Kingdom by the Nineteenth Century. The cap is Phrygian in shape and likely origin, the beard perhaps as old. The nose and ears? A rounded button and large Enid-Blytonesque ears with no points. Curious.

Fairy creatures have long been drawn or portrayed with exaggerated features, and Gnomes and Dwarfs haven't been immune. Pixie or Elfin ears are usually pointed, Dwarfs often have large noses - but not necessarily long ones, or hooked ones. Only when we look past the Disney 'Snow White' Dwarfs with their friendly bulbous hooters does the profile change.

So where did Gygax, Sutherland and others get their Gnome characteristics - pointedly the pointed ones, from?