And now, for a change, something I actually DID throw out. Well okay, I replaced it, and the story goes a little something like this: Here is the earliest edition of the collected strips of 2000AD's original series of ABC Warriors, bringing together the escapades of this rag-tag™ unit of war robots on Mars, created and written by Pat Mills and illustrated by a slavering roster of future heavyweights of the UK scene - I'm talking Gibbons, O'Neill, Ezquerra, Brendan McCarthy and of course Mick McMahon, who provided the gorgeous cover illustration for this imprint by early 200AD licencees Titan. Inside are all of the Mars stories written by Mills, plus an introductory strip by Mills and Kevin O'Neill, like the cover, produced exclusively for this collection. Years passed and this imprint was discontinued. I saw it as recently as a couple of years ago in Graphic in Cuba Street - shame I didn't pick it up then. 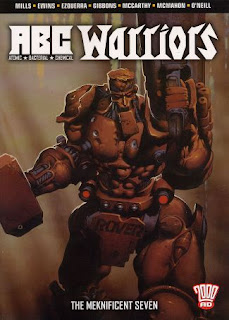 After Rebellion purchased 2000AD they went into their own reprinting venture, and started things off modestly. The reproductions are pretty good, although suffer from some downscaling due to the original comic's page dimensions not being A4 compatible. This (left) is the cover of their initial run of The Meknificent Seven. The cover is by future ABC art droid Kev Walker in a post-Simon Bisley painterly style. Walker produced vibrant and consistent work during his long tenure on the strip, but the choice of illustration - itself a very post Black Hole era design, is Awl Rong. It's ABC leader Hammerstein, which is fine, but it's a nineties redesign of the robot, doesn't sell the crucial image of the ABCs as a team, and it seems like an afterthought to provide some sort of continuity with the later reprints of the colour strips. I wonder whether the original reprint was a Titan-owned piece, which might explain its absence along with the dedicated introductory strip? Apart from setting the template for future ABC reprints, this is the least-collectable version, and it's the one I replaced as soon as I could (sorry Dave, to whom I gave it to). Moving on… 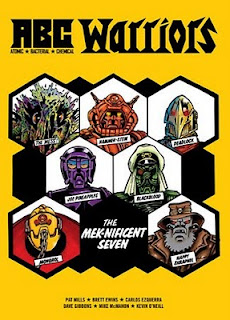 Here is Rebellion's second stab at the reprint, produced last year. It's a gorgeous cover - not the McMahon commission of course, but it is a reproduction of a contemporary 2000AD cover by the artist in question, and it's just what it should be - all seven Warriors in colour, retro-coloured to fit the Seventies era style. The contents are a step up too - the Titan strips have been included, Pat does a foreword (this aligns the volume with the others in the series published between editions), and as volume two, the aforementioned The Black Hole by Mills and Bisley/SMS is also in black and white, the first recap chapter of that strip is included as a taster. I was deid chuffed when I got this and didn't regret my purchase. The only way it could have been better to my mind would have been reprinting the original gatefold pages from 2000AD in colour, and perhaps included the Steve 'Preacher' Dillon-inked 1985 Annual story Red Planet Blues. As this wasn't written by Mills but by some guy called Alan Moore however, I could understand why Rebellion might have omitted it. 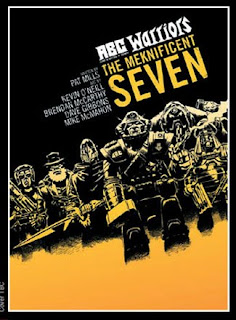 It's now 2010 and Rebellion are keen to have another poke at the US market. Onward to a new edition of The Meknificent Seven! Spine-wise this ties in with the existing collection, although the cover is a radical redesign - a pretty slick composite of a panel of Gibbon's work within, and it looks cool, but not as cool as the Titan original. Inside what do we have? An introduction by Pat, the Titan strip plus single-page strips for the core five Warriors used in their 80s return, the Black Hole teaser is back in its own volume where it belongs and in colour… Red Planet Blues.


I think I know what they might select for the next reprint now. 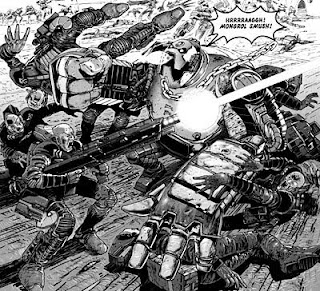