'Success is an Ugly Word'

By fluke of blogging FreakyTrigger recently covered Manics' The Masses Against The Classes on their Popular feed - mileage varies, but the fan support in the feedback is strong and not at all scary (they breed them polite and articulate over there.) So that's now fifteen years almost to the month since Manic Street Preachers' last number one single. The top selling singles are an interesting thing -  If You Tolerate This is Manics at their most stadium-friendly and gracefully earnest - probably the closest to Nicky Wire's later-voiced "attempt at mass communication";  Masses strikes me as an attempt to mollify departed fans - and they're just the number ones. The breakthrough could be Manics' NME benefit album cover of Suicide is Painless (Theme from M*A*S*H) - I'll come to cover versions in the next post, but it's an intriguing entry alongside Design for Life (being caught up in a New Lad misunderstanding earned it a Number Two position) and Everything Must Go the survivor anthem. From the unloved Lifeblood are two Number Two singles, while 'comeback' Send Away the Tigers yields a further couple, and the last top ten single the band has achieved since.

But Masses informs the title of this post and features on both of Manic Street Preachers' singles collections, both separated by roughly ten years and covering respectively ten and twenty years of the band's existence in the popular eye. A good band compilation can be met in different ways, the two most popular routes being the Best Of selection, and the more complete Singles Collection route. Alternatively, you might find yourself buying a collection edited and presented out of sequence for maximum playability (Queen’s Greatest Hits being an easy example), or something straight-down-the line, the chronological story. Manic Street Preachers, being somewhat a warts-and-all act, have had a bite of both, and the result is more or less a comprehensive history of the band in its early life and midlife. 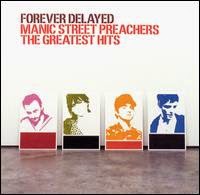 Forever Delayed is their first Best Of – out of sequence ordering, fresh off the boat post-Know Your Enemy and the earlier Masses single. It’s a singles set with some exclusions, while the stand-alone tracks There By the Grace of God (a fitting taste of what was to come with the next album Lifeblood) and the dour Door to the River fill out the roster. Being the mid-era release it’s strong on the recent singles and an effective early history, but it only tells half the story. For some that may be enough. 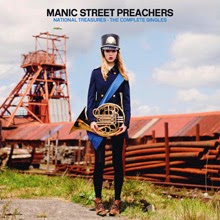 There are thirty-eight singles on National Treasures, twenty-four of which are UK top twenty hits. The collection is more generous to the early years than Forever Delayed (Slash and Burn is reinstated for one), and it seems to take an age to get through the first two albums alone. Of course Treasures continues where the previous collection left off, including tracks from Lifeblood through to Postcards From a Young Man. Also, unlike Forever Delayed, it's in chronological order, which adds to the storytelling aspect - I can see why some singles collections go out of release order, but prefer this approach. Also, as my friend David pints out, if you’re not a fan of a band’s earlier or later work, the track ordering enables easier entry and exit points!  Door to the River is dropped, but the stand-alone track, a cover of The The's This is the Day, is the feature, and I must admit to preferring it over the original for its urgency and build! A noteable omission is anything from Journal For Plague Lovers; the band never released a single from this, though there could have easily been two or three contenders, and I miss those songs for it.

In conclusion, both collections are worthwhile, and both did the business in sales, but it's hard to go past National Treasures simply because the story of the band continues and is still interesting. I've argued before that my following of Manics is a post-Richey Edwards thing, and that they are a band who I have aged with, so my appreciation is always going to be contextual. If you could argue that collections mark transition points in band histories, then I would agree that from the two albums which follow this latest Best Of a new direction has indeed been forged, and Manic Street Preachers are into another phase again - once again, to be covered in an upcoming and final post. With less of an eye toward the charts, and more of an eye towards creating an on-going narrative of self-reflection and maturity, I think this latest phase is their most rewarding yet.
Posted by Jet Simian at 12:00 PM