I was very much saddened to hear of the passing of UK comics artists Brett Ewins earlier this week.

Ewins was at his height in the pages of 2000AD just as I began to take notice of it and started collecting. Through the middle era of Rogue Trooper and then on to memorable stints on Judge Dredd and its spin-off Anderson PSI Division, Ewins’ work was rarely out of the mag for long, and in time he’d notch up another well-loved series to his belt, the quite brilliant Bad Company.

His work made an immediate impression on me, for various reasons. It was recognisable, reliable, and easy on the eye – you could admire the brilliance of artists like Mick McMahon or Carlos Ezquerra, the robust meatiness of Cam Kennedy’s brushwork or the precise lines of Brian Bolland, but Ewins seemed more accessible to the illustrator in training. This isn’t to say his work was the less, or not as sophisticated than his stable mates, but to a degree – and in particular in Ewins’ middle era of the mid-Eighties in 2000AD, there’s the ability to anatomise his work; he paints with a heavy brush, all elements on the page readily-identifiable components; his work, while dynamic and obviously influenced by US comics artists, had a layered arrangement which was easier for me to pick apart and see how he’d put everything together. To this day McMahon at his height, and Kevin O’Neill with him, seem to defy compositional analysis on my part – some panels are brilliant messes – orgies of limbs and skewed planes, but Ewins’ work, which became crisper and more stylised over time, was a great lead-in to the world of illustration. I’d say that his work, alongside his colleague and friend Steve Dillon, was the style I most frequently looked to in developing my own meagre talents. 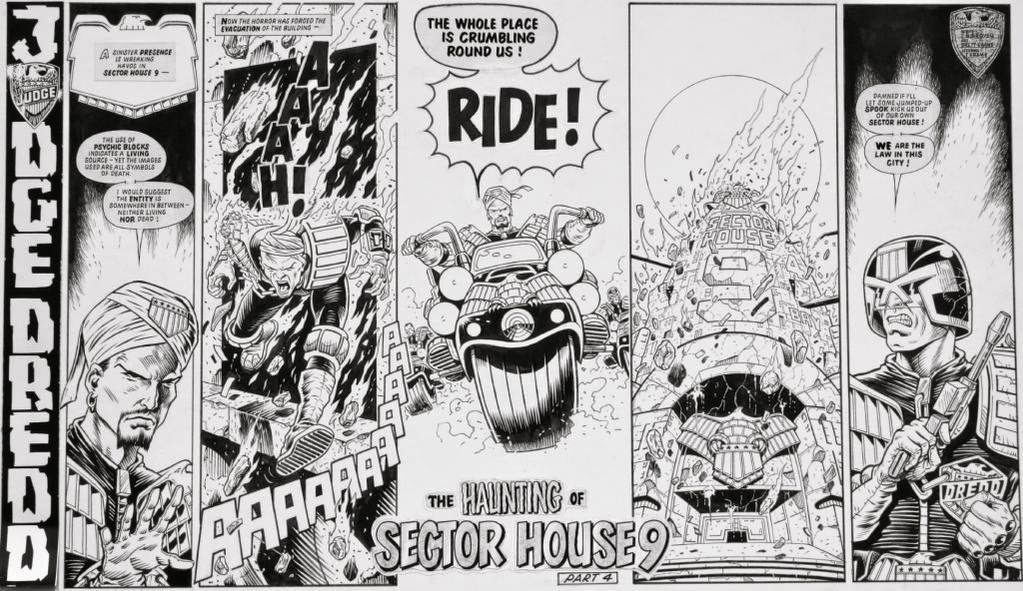 Personal favourites of mine seem to echo those of a lot of others from Ewins' portfolio – the psionic thriller The Haunting of Sector House 9 is regarded as a bit of a throwaway Dredd story, but it introduced some great characters in PSI Chief Judge Omar, and my favourite male PSI Judge the never-seen-again Judge Gellar, whose half-head of hair standing on end made for such an attractive prog cover. Maybe it was the fact that for such a short story Ewins provided no fewer than three covers for Sector House, but it with its spectral terrors, heavy line work and fun script, it was an early highlight in my collection.
Ewins also seemed the natural successor to Bolland in depicting Judge Anderson – other reliable hands like Cliff Robinson and Robin Smith had drawn her, too, but Ewins’ outing on the classic The Possessed cements the Eighties Anderson entirely – all bubblegum curves and Debbie Harry hair combined. Added to that his off-the-leash body horror panels and quirky design choices (Exorcist Judges!) made for a really fun strip. That same approach to the phantasmagorical led to Ewins and past co-creators Jim McCarthy and Pete Milligan working on the mad and memorable Bad Company, a SF Vietnam allegory on a heaving alien jungle world detailing the descent of a band of misfit soldiers into hell, led by their Karloffian sergeant Kano. 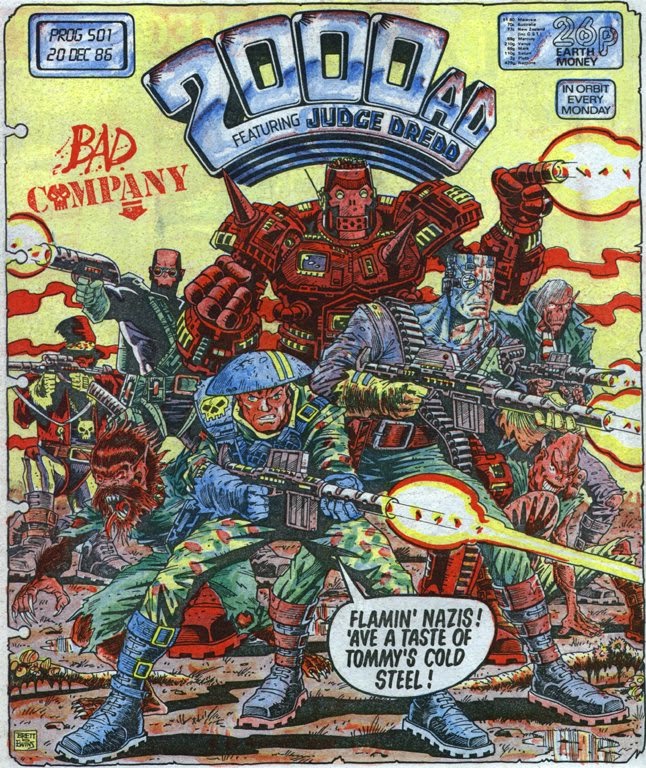 Looking back, I think Bad Company was Brett Ewins' peak at The Galaxy's Greatest Comic; despite being the first artist to draw ABC Warriors' Deadlock in strip form, despite Ewins' involvement in Dredd's The Day the Law Died, and visualising the Wally Squad, perhaps it's the unity of having one artistic team in  Ewins and McCarthy that makes the later series the most visually memorable.

After Bad Company came Deadline, Ewins' own title with Steve Dillon which introduced readers to Jamie Hewitt and combined Ewins' two loves of music and comics, being the mature readers' pop culture magazine that 2000AD couldn't yet manage to be. Though short-lived and seemingly doomed by the fate of its greatest character's movie adaptation, Deadline gave the world Tank Girl, and arguably in Ewins and Dillon Tank Girl has two godfathers. 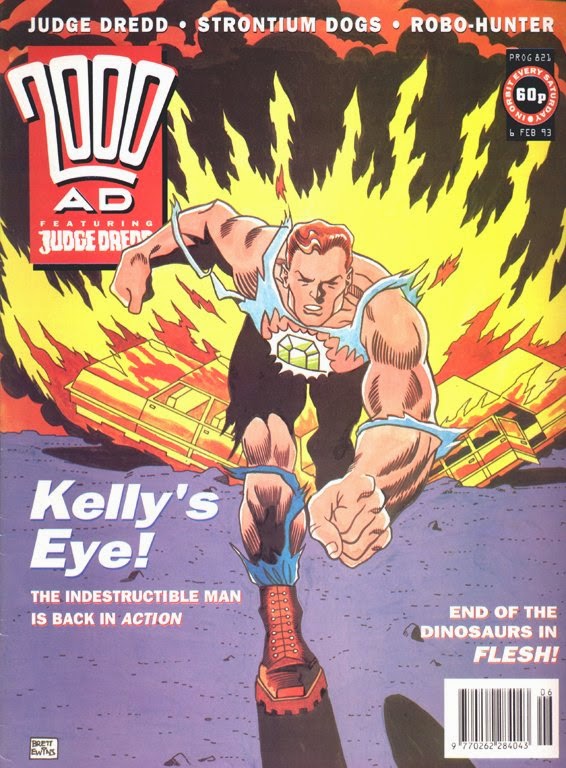 Unfortunately the pressure of real-life deadlines and multiple commitments seem to have had a deleterious effect on Ewins' mental health, and as commissions suffered and dried up, the artist went into a long period of illness against which he fought to the endwhich contributed to his all-but disappearing from the industry. I remember seeing his work in 2000AD around 1992 - pretty much the last work he did for the title, and how it had diminished, becoming even more stylised, less textured, relying on tricks like duplicate panels and close ups, seemingly to cut corners - the whole effect was only increased by the early, flat computer colouring of the time. Not knowing the story behind the pictures, I was perhaps too dismissive. ﻿﻿﻿﻿﻿
There's still a huge amount I love about Ewins' work for 2000AD. Much of it is of its time, a sort of Eighties Noir with Dutch angles and swimming in shadow. Also, it was a rare thing to see in the early years of 2000AD, but Ewins was  an artist unafraid to embrace the, er, 'cheesecake', and I'd be lying if I didn't say that his Anderson and Rogue Trooper's femme fatale Venus Bluegenes made a discreet impact on my flowering adolescence. I still reckon Ewins drew Venus best.

I hope we'll see a decent Ewins collection from Rebellion Publishing in time. For me, he is the epitome of the comic in the Eighties.
Posted by Jet Simian at 10:04 PM