Some very sad news to wake to this morning: Carlos Ezquerra has died, after a ten year battle with cancer. 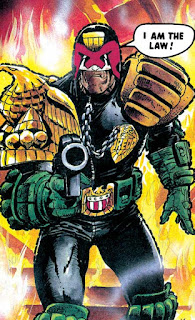 This is a huge blow for UK comics fans, and in particular fans of 2000AD and Judge Dredd. The affectionately-named 'King' CarlosEzquerra can be fairly described as one of the fathers of Dredd, providing the first designs of the future lawman, a mix of Death Race's Frankenstein and Conquistador - fitting for a Spaniard, perhaps. And to me, somehow, Carlos' work evoked a Mediterranean sensibility more than any other artist in Tharg's stable. 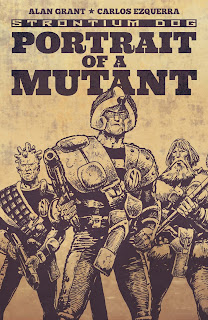 Ezquerra's work is there from Prog 1, and continued through to 2018, with very few breaks. He was a warhorse, from the likes of Battle (Easy Company) and Starlord (gifting the world of comics the brilliant space western Strontium Dog and its mutant bounty hunter Johnny Alpha), and even ventured to other IPC/Fleetway titles - a brief stint for Eagle, plus Crisis and inevitably the Judge Dredd Megazine. As the ubiquitous Dredd and Strontium Dog artist Ezquerra surely occupies the highest triumvirate alongside Bolland and McMahon. Speedy, prolific, and still eminently collectible, we'll see his work for some time to come. 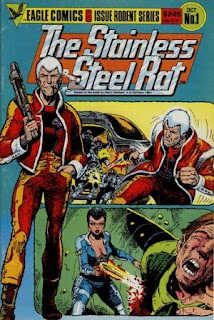 The phrase 'making it your own' is a cliche, but so applicable to Ezquerra's adaptations. Dredd is such a robust character that he's endured countless interpretations, but despite occasional flirtations with other considerable talents, there's really only been one Strontium Dog artist, and even in prose I can't picture anybody in the role of Harry Harrison's 'Slippery' Jim DiGriz than Carlos' James Coburn lookalike in the Stainless Steel Rat series.


For me, though Ezquerra's  style barely changed, that was its greatest strength. Instantly recognisable, effortlessly consistent, but with a worldly, carnal appeal. His dredd and Alpha are virtually the same cloth - burly and tall, but not ridculously muscly, while his women (vampire bounty hunter Durham Red, femme fatale Angelina DiGriz) are pultritudinous, leggy and unapologetically curvy. Like many of the Dredd artists he delights in grotesques - besides Strontium Dog's colourful cast of mutants, Carlos drew a mean brace of Fatties for Mega City One. Even the robotic Blackblood on a rare outing in ABC Warriors is given an idle killer's pot belly. All with a knowing wink, each consistent and so meaty you could slice them like salami.

I still can't quite get my head around the Dredd mega epics entirely to his name: Apocalypse War, Necropolis, Inferno, Wilderlands - not to mention all those epic Johnny Alpha tales - Portrait of a Mutant, Wanted, The Killing. Phew.

My early collecting of 2000AD can be summed in Ezquerra covers: my earliest 2000AD cover by Carlos: Prog 181 (Johnny Alpha "It's taken my best shot - and it still won't die!), my earliest Dredd cover by Carlos: Prog 245 ("Let the Apocalypse Begin!"), and many more followed, of course. There'll likely be a huge tribute in the pages of 2000AD to come, and in the mean-time heartfelt tributes from the likes of Pat Mills, Karl Urban, and a good number of Thargs and Megazine editors past and present.

The King is dead, but his legacy will live forever.