The Little Shop... of Hours

I love a little shop!

Specifically, I love THIS little shop. J Grubb's General Store, located on the outskirts of the Gloucester village of Stockbridge; an unassuming hamlet which by quirk of the space-time continuum has hosted the odd alien incursion and dimensional breach since the 17th of October 1979. As it happens, the Doctor likes this shop, too - or has at least enjoyed its services on at least one occasion. Over the years and since its debut in the first ever Doctor Who Weekly feature strip The Iron Legion, Grubb's Store has been an essential part of Stockbridge, which has now been a location in six comic stories, five Big Finish audio stories, and has been visited by no fewer than five incarnations of the Time Lord in question. 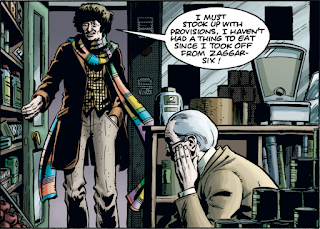 I love this shop so much I decided some time ago to make a model of it to scale with my metal figures. It's actually going to be the first model of a building I've ever made for that scale (it may be my first ever in any scale, come to that), and as usual, I'm making it with as few bought pieces as possible. 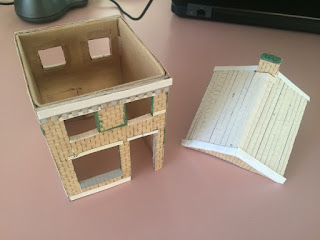 The shell is a workplace cast-off - an easy-assemble pencil holder made from sturdy card and rescued from a recycling bin during a clean-out, while its 'skin' of brick, slate and wood is also scrap card. I toyed with the idea of purchasing ready-moulded styrofoam brick walls, but wanted to see if I could make them myself. It took a while, and so far the project has been bested by the usual hurdles: bad measuring, planning on the fly, time. Here's the work so far... 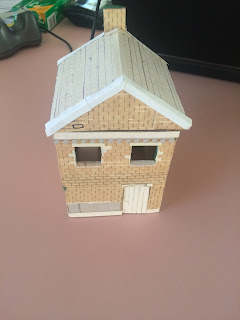 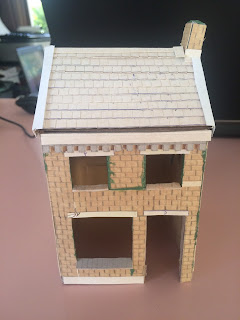 Email ThisBlogThis!Share to TwitterShare to FacebookShare to Pinterest
Labels: Comics, Doctor Who, Make Me a Model, Spitting Lead