Tomorrow I'm going to see Star Wars The Force Awakens. I'm keen to see it - I won't lie, but, you know, my days of being a super huge Star Wars fan are still nearly forty years in my past.

I've posted on that thing before, so I won't rehash it here, but inevitably, this road towards the first original post-Lucas instalment in the Star Wars saga has involved me watching the original trilogy with Jet Jr.

It's been a really interesting exercise; although I own the DVDs (special editions) of the original trilogy, I haven't watched them that much, and never realy watched the moies uch outside their cinema screenings. I remember the surprise and bewilderment I felt when I missed a video night at some friends' place and they reported they'd watched the 'entire' trilogy on VHS in one sitting. Why? What could be so interesting in that? It was that far off my radar.

Jet Jr is currently Star Wars mad, the phenomenon having elbowed superheroes firmly aside, it no jostles shoulders with Thunderbirds. But like a lot of kids his age and a little older, his reading of the series is different - it's definitely for him the story of Anakin and Luke, and the Anakin/Vader connection - once encountered - is just second nature. On the other hand, me watching it with him made me watch The Empire Strikes Back in particular in a way I hadn't properly since maybe 1981 or so. And even then I was convinced Vader had to be lying. It's been... educational. Whereas Darth Vader was the definite (ultimate?) bogeyman of my childhood, to Jr he's the most interesing character in the series, bar the two main Droids of course. Of course, he's not seen ALL of the movies yet... 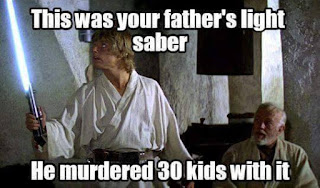 So, tomorrow the new chapter opens and I'm seeing it with my brother in law under the guise of 'due diligence' for our kids' sake. One reason Jr and I haven't seen the prequel trilogy is because I'm not sure he'd react that well to its darkness, so if the new movie is aimed more at mature fans (and the front page of the local paper somewhat depressingly illustrated this in photos of last week's local premieres)  then The Force Awakens might wait awhile before the young man gets to see it. It won't change things, and it won't change his love for the movies he has seen, I'm quite sure of that.